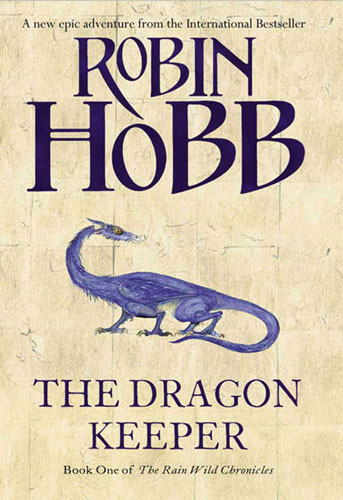 Guided by the great blue dragon Tintaglia, they came from the sea: a Tangle of serpents fighting their way up the Rain Wilds River, the first to make the perilous journey to the cocooning grounds in generations. Many have died along the way. With its acid waters and impenetrable forest, it is a hard place for any to survive. People are changed by the Rain Wilds, subtly or otherwise. One such is Thymara. Born with black claws and other aberrations, she should have been exposed at birth. But her father saved her and her mother has never forgiven him.

The Dragon Keeper is the first book in a new series by Robin Hobb - a sequel of sorts to her three previous trilogies set in 'The Realm of the Elderlings'. It follows the lives of several characters living in and around the Rain Wilds as they attempt to look after a group of newly hatched dragons.

The main characters are new for this series, and are refreshingly different - it has a particular focus on two female characters, both of whom are rejected by their home culture. The plot however is a little weak, and there seems to be a lot of padding. On several occasions the narrative gets caught up in characters' reminiscences in the middle of a scene and this distracts from the ongoing events and feels out of place.

I wasn't as impressed by this book as its predecessors, particularly as it didn't really feel like a whole story. It is the first half of a duology, and feels like some parts were added to get it up to length for two volumes, making the story quite slow.

Overall, a fair follow-up to Hobb's previous novels, but alone it doesn't quite reach their level. I hope the second half is stronger and pulls the whole up to the author's usual brilliance.