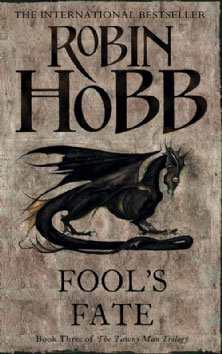 A small and sadly untried coterie sail towards the distant island of Aslevjal. There they must fulfil the Narcheska's challenge to her betrothed: to lay the head of the dragon Icefyre, whom legends tell is buried there deep beneath the ice, upon her hearth. Only with the completion of this quest can the marriage proceed, and the resulting alliance signal an end to war between the two kingdoms.

The final book in the Tawny Man trilogy, and ninth overall in Robin Hobb's epic series, sees Fitz travel to the island of Asjeval, accompanying the prince on his quest. It makes for a fantastic end to the story and wraps things up much more roundly than Fitz's previous concluding episode in Assassin's Quest.

I was surprised by how quickly the story seemed to pass at first, although there was actually more plot to come than I was expecting which rounded it out nicely. I managed to read almost the entire second half over two days in a manic reading session which was quite a rollercoaster of emotion and was perhaps not the best way to take everything in.

Hobb has written an amazing character in Fitz - she makes him incredibly real and the first person perspective of the writing is incredibly easy to align to. The other characters are all well developed and used in sufficient detail to flesh out the entire world. I can't find the words really to describe how deeply I got drawn into the story and enjoyed following Fitz's life.

I can't recommend this series of books enough - I find Robin Hobb's books to be some of the most irresistible on the market and each one captures my attention so dramatically I find it hard to put them down. I'm really looking forward to continuing into 'The Rain Wild Chronicles' which continue the story of this world.