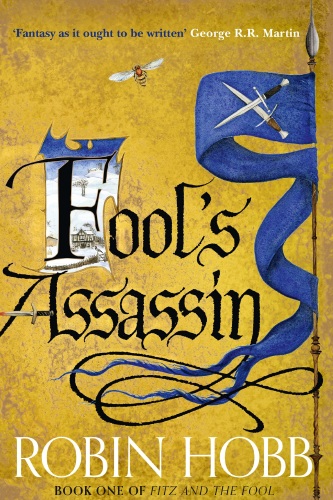 Tom Badgerlock has been living peaceably in the manor house at Withywoods with his beloved wife Molly these many years, the estate a reward to his family for loyal service to the crown.

But behind the facade of respectable middle-age lies a turbulent and violent past. For Tom Badgerlock is actually FitzChivalry Farseer, bastard scion of the Farseer line, convicted user of Beast-magic, and assassin. A man who has risked much for his king and lost more.

Then one Winterfest night a messenger arrives to seek out Fitz, but mysteriously disappears, leaving nothing but a blood-trail. What was the message? Who was the sender? And what has happened to the messenger?

Suddenly Fitz's violent old life erupts into the peace of his new world, and nothing and no one is safe.

Fitz is back for his seventh book, and overall the fourteenth full length fantasy novel set in Robin Hobb's Realm of the Elderlings. It’s a fantastic start to a new series within the series, following Fitz some years after the end of his last adventure as he lives the perfect life he’s always wanted.

I really love Hobb's writing and it's always fantastic to return to her world which is incredibly immersive and which I am always disappointed to have to put down. The character of Fitz continues to be appealing and I always enjoy time spent in his company.

Having said that, there were aspects of this novel that felt less thought-through than in the previous novels - the foreshadowing was overly obvious throughout much of the novel which made some of the reveals less surprising than they might have been. It seemed to be done to the point that the characters seemed stupid for not being able to see it, but I suppose it could be argued that this was presented deliberately in this way to fit the first-person narrative.

The plot is quite episodic, particularly through the first half or more, with us joining the narrative for a particular incident or two before jumping forward in time, sometimes years, and I think I found this frustrating because I love spending time with the characters and felt I was missing out. However there are also larger shifts in plot which make quite dramatic changes which felt forced, as if they could have been done with a more subtle and smoother transition.

Despite this, I absolutely loved this book and can't wait for the next one. I enjoy every single moment that a Fitz story is in my hands and can imagine myself wanting to pick one up again before next year.