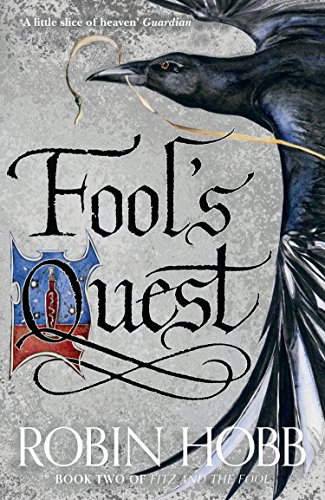 Years ago, they freed a dragon from the glaciers on Aslevjal. Then they parted ways, the Fool returning to far-off Clerres, while Fitz finally claimed a wife, a family, and a home of his own.

Now, betrayed by his own people and broken by torment, the Fool has made his way back to the Six Duchies. But as Fitz attempts to heal his old friend in Buckkeep Castle, his young daughter Bee is abducted from Withywoods by pale and mysterious raiders who leave ruin and confusion in their wake.

The second book in Robin Hobb's fifth(isn) trilogy in the Realm of the Elderlings world is an excellent continuation of the tale of Fitz - a royal bastard hiding in plain sight. The story follows on directly from Fool's Assassin, and the characters must deal with the repercussions of the events at the end of that novel.

As usual, Hobb's world is a wonderful place to return to. The familiarity of the places and people which populate her stories bring each story a sense of returning home and greeting an old friend, and as a reader I'd be happy to sit in their company through narration of their daily life, even if there weren't exciting events afoot.

However Hobb also manages to write quite frustrating characters. It's finally dawned on me that Fitz, the main character, isn't particularly bright, and as well as being completely unable to spot details which are painfully obvious to the reader, he makes reckless decisions that lead him into more and more trouble. The age old fantasy trope of characters who don't talk to each other is present, and there are plot twists that the reader has seen coming for miles that the characters continue to fail to grasp.

Despite this, this is another addictive novel to read, and I would highly recommend Hobb's series as some of the best fantasy writing available - she builds a world which is completely believable and in which you want to stay despite its flaws. I look forward to the third book and finding out where she takes the story next, with only a little edge of sadness that it'll be the end of another trilogy.