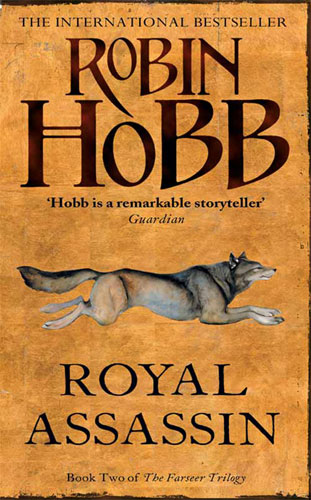 King Shrewd has been struck down by a mysterious illness and King-in-waiting, Verity, spends all his time attempting to conjure storms to confuse and destroy the Red-Ship Raiders. And when he leaves on an insane mission to seek out the mystical Elderings, Fitz is left alone and friendless but for the wolf Nighteyes and the King's Fool with his cryptic prophesies.

The second book in Robin Hobb's Farseer trilogy sees Fitz return home to Buckkeep where his agony grandfather, the King, has Bren struck down with a mystery illness. Although following on directly from the first novel, Fitz seems older now, becoming something of the surly teenager.

The story is slow going and the plot quite vague for much of the book, as it tells the story of Fitz's life without much focus on a particular strand or event. However this may just be my erroneous expectation of something to come - I had misread the blurb, and so was expecting a plot turn that never arrived. In the second half, the main thread emerges, and it is well written, so although elements are clear for a while, things don't all come together until the end. The speed picks up as well and the books becomes 'unputdownable'.

It's quite a violent book, and some of the scenes are quite graphic, to the extent that I was surprised by them. The characters are well continued from the first book, and each are believable and distinct.

Overall this is an excellent sequel, entertaining and advancing the plot well, taking forward from what could have been a stand alone and continuing the treads along their natural course. There's no doubt I will be continuing to book three.