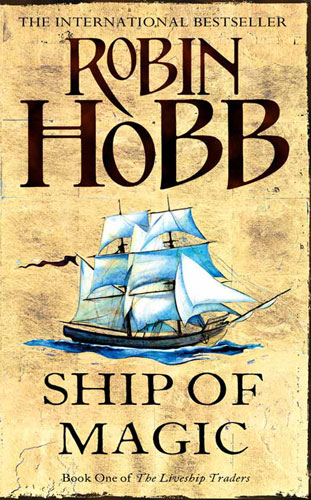 Wizardwood - a sentient wood. The most precious commodity in the world. It comes only from the Rain River Wilds, but how can one trade with the Rain River Traders when only a liveship, fashioned from wizardwood, can negotiate the perilous waters of the Rain River? The liveship Vivacia is about to undergo her quickening, and Althea waits with awe and anticipation for the ship that she loves more than anything in the world to awaken, only to find that her family has other plans for her.

I was warned before I started reading this first book in the Liveship Traders trilogy, a follow-up to the Farseer trilogy, that it was very different to the series which preceded it. The tale focusses on the Vestrit family, owners of a soon-to-quicken liveship, and the perils that befall them in the changing society of Bingtown.

I must confess that I didn't think it much different to its predecessors. While there is a switch from the first- to third-person perspective, and the plot and characters are totally new, the writing style is very similar and the nature of the story is too. Like the Farseer books, this deals with a group of characters who, in various ways, aren't in situations they feel natural in, and each and every one is learning to live differently.

This book contains one of the cleverest relationships I think I have ever read - that between Malta, a teenage girl, and her mother and grandmother. Although superficially Malta seems to be something of a brat, I found it easier and easier to identify with her, while still being sympathetic with her family members. I really enjoyed how Hobb wrote this part of the storyline so that no character seems detestable to the reader, and it contrasts nicely with what happens between Malta's brother and father.

My only criticism of the style would be the way that each chapter starts without establishing itself, waiting a few paragraphs before naming the characters and locations in question. Every now and then this can be an interesting technique but it felt overused and a bit of a cliché. In terms of the plot, there was one element that was obviously coming a long way off, but I think that this was clear by design and so didn't spoil the experience.

Overall, I can't understand this book's critics - it is just as good as the Farseer trilogy and very similar in style. I look forward to reading on.