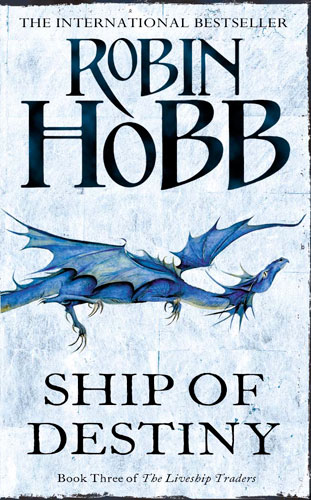 The dragon, Tintaglia, has been released from her wizardwood coffin, only to find that the glories of her kingdom have passed into ancient memory. Meanwhile, Malta Vestrit navigates the acid flow of the Rain Wild River in a decomposing boat, accompanied by the Satrap Cosgo and his Companion Kekki. Against hope, a ship appears in the alien waters, but does it mean rescue, or a further nightmare, for Malta?

Robin Hobb's second trilogy set in the Realm of the Elderlings has focused on the Liveship Traders of Bingtown and their many and varied battles. This third book rounds off the story extremely well, wrapping up almost all of the threads, even some that I'd forgotten about, and brings the tale to a really satisfying close.

I read the final third of the book - around 300 pages - in one sitting as the tension and drama reached the highest levels. There is action aplenty and it's amazing how well all the seemingly disparate threads of narrative weave back together to bring the ending into place. All the characters change and grow and even those who started off as irritating become loveable in some respects. Well, almost all.

I love the tantalising hints of a story that spans the trilogies, that grow almost to the point of being explicit but not quite reaching it, and I'm really looking forward to reading the Tawny Man trilogy which follows.

My only criticisms of this book would be the length, though not in a bad way - just that it is so absorbing to read and there's so little time in which to snatch a chunk of text, and keeping track of time in the narrative. I found it hard to work out whether the different threads of story were meant to be progressing at the same pace, and particularly when travelling I wasn't clear on how long the journeys had taken.

Despite this, it has to be one of the best books I've read this year, and I'm very glad that the next trilogy is already written and I don't have to wait for more to be penned.