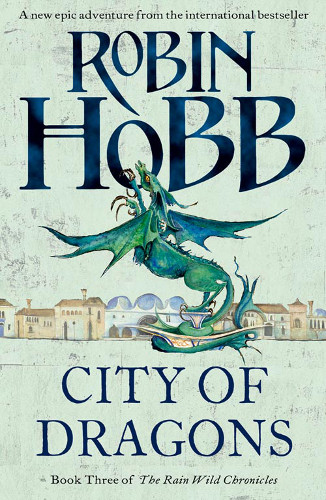 The dragons and their keepers have discovered Kelsingra but so far only Heeby has succeeded in flying over the river to enter the fabled city. The other dragons, with their deformed wings and feeble muscles, are afraid to risk failure and humiliation.

But wondrous things await in Kelsingra, a city built for dragons and their Elderling keepers. Alise, overwhelmed by the treasures she finds there, records her finds for posterity. Once the rest of the world knows about the riches the city contains, nothing will ever be the same again.

The third book in the Rain Wilds Chronicles and twelfth overall in Robin Hobb's Realm of the Elderlings series feels shorter and much more character focussed than most of the earlier books.

Rather than following a quest, as many of the other books in the series have, this book follows the daily lives of the characters from the previous two novels as they continue from the point these books brought them. It makes some interesting points about prejudice, society and childrearing, and the ensemble cast makes the drama feel more real and rounded than ever before.

The plot feels simple despite the array of threads that run through the book, and for the most part each is split into its own chapters, although there are some where the narratives are intertwined, which is a nice variation. I really love the asides between chapters that Hobb uses to expand the world in which her stories are set, and they provide a humorous and interesting companion to the main story.

While it felt a calmer story, I was really hooked by this book and can't believe how quickly I read it compared to some of Hobb's other books. I really enjoy spending time with these characters and hope that Hobb will find more stories to pen once this one is complete.