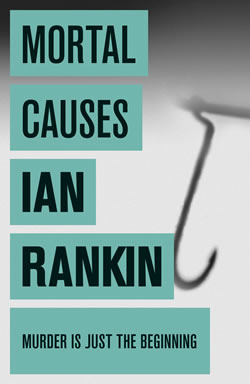 It is August in Edinburgh and the Festival is in full swing. A brutally tortured body is discovered in one of the city's subterranean streets and marks on the corpse cause Rebus to suspect sectarian activists. The prospect of a terrorist atrocity in a city heaving with tourists is almost unthinkable. And when the victim turns out to be the son of a notorious gangster Rebus realises he's sitting atop a volcano of mayhem about to erupt.

Book six of Ian Rankin's Inspector Rebus series is set during the Edinburgh Festival, where, as you might expect from a book of this genre, a body is found. It's an interesting tale, but the plot felt a bit muddy in places and I wasn't entirely sure how the various threads wove together.

I didn't feel that this novel had quite the same grasp on the characters as I've seen in earlier novels. Rebus felt flatter - he'd lost some of the interests, some of the depth of previous incarnations, and his personal life seemed to have gained a touch of black comedy. The supporting cast seemed almost forgotten - existing just to add a few lines here and there - and replaced by newcomers, the torrent of whom was slightly overwhelming. Of course having said that, the same was true of an earlier novel set in London, but it felt more out of place here.

The plot did come together in the end, and looking back makes a fairly clear picture, but it still feels like it was a point looking for a story that drove this novel, rather than the story being central. There are so many facets and the narrative (and indeed the character) jump between them so often it became hard to keep track of who was where, what they were investigating, and why it was even relevant.

Overall though I did enjoy reading it, and one book that feels slightly out of place in the series certainly won't put me off carrying on reading them. I was also slightly baffled by the cover of my copy, which from a distance looks like simplistic line art of a horse's head, but when examined closely with knowledge from the story is much more sinister.