A Question of Blood 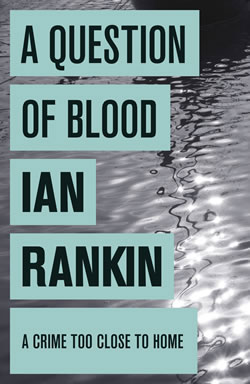 Two seventeen-year-olds are killed by an ex-Army loner who has gone off the rails. The mystery takes Rebus into the heart of a shattered community. Ex-Army himself, Rebus becomes fascinated by the killer, and finds he is not alone. Army investigators are on the scene, and won't be shaken off. The killer had friends and enemies to spare and left behind a legacy of secrets and lies. Rebus has more than his share of personal problems, too. He's fresh out of hospital, but won't say how it happened. Could there be a connection with a house-fire and the unfortunate death of a petty criminal who had been harassing Rebus's colleague Siobhan Clarke?

Deep into the Rebus series, we see the eponymous detective face a novel crime - two schoolboys murdered and another wounded - which hits close to home when he discovers one of the victims is a long lost relative.

It's quite a complex plot with a lot of different strands weaving through, and writing this a few weeks after reading it, I'm not entirely clear in the end quite how it was all wrapped up. Some of the threads are serial ones though rather than specific to this book, and I think it's fascinating how this series has evolved into something that can have continuing plot lines mixed in with the crime of the week.

The Rebus stories are currently my favourite in the crime genre, with characters that are surprisingly likeable and plots that suggest a great understanding of the realities of police work, without feeling like they’ve been particularly livened up for the purposes of telling a story, like some of the more thriller-esque crime novels that I’ve been reading.

A solid novel in a solid series that I really enjoy reading.