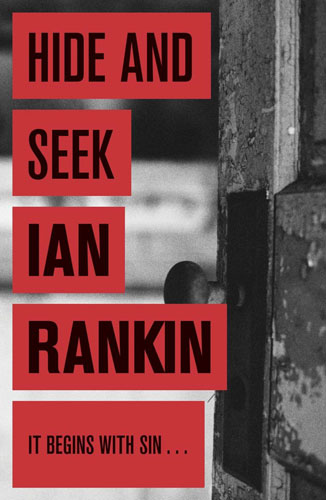 A junkie lies dead in an Edinburgh squat spreadeagled, cross-like on the floor, between two burned-down candles, a five-pointed star daubed on the wall above. Just another dead addict, until John Rebus begins to chip away at the indifference, treachery, deceit and sleaze that lurks beneath the façade of the Edinburgh familiar to the tourists. Only Rebus seems to care about a death which looks more like a murder every day, about a seductive danger he can almost taste, appealing to the darkest corners of his mind.

Hide and Seek is the second book in Ian Rankin's Inspector Rebus series, in which the detective finds himself drawn into the mystery of a body found beneath a pentagram. As the author himself admits in my copy's introduction, there are some rough edges and the central character has a number of traits that seem unusual given his biography.

The plot is surprisingly basic compared to the psychological depth of the first book, Knots & Crosses, although red herrings provide a semblance of complexity. I found the ending surprisingly weak, and though it was believable I thought there was plenty more that could have been explored.

Rebus is the only character that we deal with in great depth, and I found him to have been toned down since the first novel. Similarly the other characters have less development, although with some there is the hint that they are being introduced as regulars to be used again in future. I particularly enjoyed the dynamic between Rebus and his 'sidekick', Brian Holmes, with what looks to be becoming a classic relationship based on not talking to one another.

I have enjoyed this book, which is slightly different in tone to some of the 'lighter' crime fiction I have been reading recently, and am looking forward to seeing how the characters develop over the rest of the series.