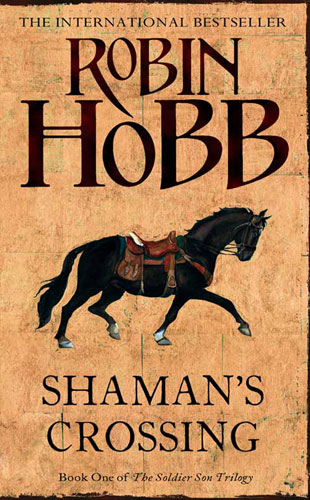 Young Nevare Burvelle is the second son of a second son. Traditionally in Gernia, the firstborn son is heir to the family fortunes, the second son bears a sword and the third son is consecrated to the priesthood. Nevare will follow his father - newly made a lord by the King - into the cavalry; to the frontier and thence to an advantageous marriage, to carry on the Burvelle name. It is a golden future, and Nevare looks forward to it with relish.

I've enjoyed everything I've read by Robin Hobb (including some short works under her alternative name - Megan Lindholm), and so when a friend said that she'd found the Soldier Son trilogy hard going I was unconvinced. However after giving up a fair chunk of time to it I'm afraid I've had to (at least temporarily) admit defeat after only a couple of hundred pages.

The story focussed on a young boy - the second son of a newly created noble, and therefore destined to become a soldier. We follow his life through some key formative experiences and as he travels off to begin his military training. It sounds lil there's promise, and a little similar to Fitz in the author's other trilogies, but I was unable to become gripped by character or narrative and it felt bland and shallow in comparison to Hobb's other work.

Often I found that I was unable to focus on the words on the page and my mind would drift even while my eyes continued to scan the page and my hands continued to turn them, such that when it came back into focus I would have to turn back several pages to find out what was happening. Ultimately this was why I felt the need to stop reading and move on to another book - my reading time is precious (especially so for the first few months of this year) and I've decided to be quite brutal about dropping books that don't grip me sufficiently.

I will try to go back and have another go at this series later, but for now I've set it aside.