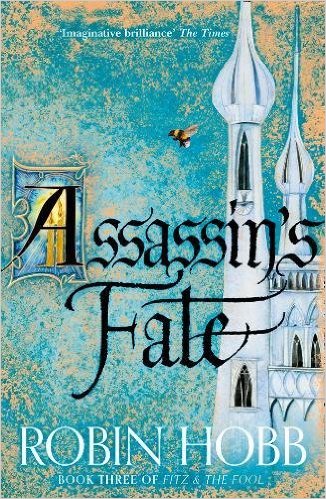 Prince FitzChivalry Farseer's daughter Bee was violently abducted from Withywoods by Servants of the Four in their search for the Unexpected Son, foretold to wield great power. With Fitz in pursuit, the Servants fled through a Skill-pillar, leaving no trace.

The third and final entry in the Fitz and the Fool trilogy serves not just as a conclusion to this three book arc, but also is a continuation of the ongoing storylines that cross the nine Fitz novels as well as the seven Liveships/Rain Wilds novels that exist in the same fictional universe. As such, I'd strongly recommend reading the whole of the rest of the series before tackling this novel, as it serves as a satisfactory sequel to everything that's gone before, and some aspect are massive spoilers for the earlier stories, and/or won't make sense to readers not familiar with them.

In this book we rejoin Fitz and Fool as they set off on a mission of vengeance against Clerres - home of the White Prophets, the Fool's origin point, and the killers of Fitz's daughter Bee. It truly feels like an epic - 850 pages of quest - and is a surprisingly emotional adventure that explores the world and exposes more and more detail about a realm that I've enjoyed visiting so many times over the past seven years.

As with the earlier books in this trilogy, some of the foreshadowing felt a bit more obvious than in the earlier books - whether this is because of the way prophecies are presented, my own familiarity with the style, or a deliberate choice of the author - yet this time that's less frustrating, and more vital. I felt that the foreshadowing this time served well to set up things that came later on and to put the reader into the correct emotional state to embrace the narrative as it unfolded.

Another great adventure, strong, emotional and epic. An excellent conclusion to this trilogy and extension of the series as a whole.