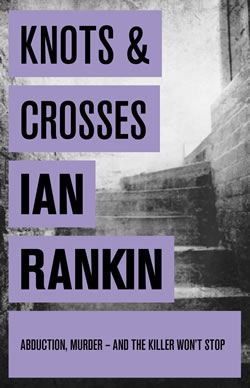 'And in Edinburgh of all places. I mean, you never think of that sort of thing happening in Edinburgh, do you...?'

That sort of thing... is the brutal abduction and murder of two young girls. And now a third is missing, presumably gone to the same sad end. Detective Sergeant John Rebus, smoking and drinking too much, his own young daughter spirited away south by his disenchanted wife, is one of many policemen hunting the killer. And then the messages begin to arrive: knotted string and matchstick crosses - taunting Rebus with pieces of a puzzle only he can solve.

The first book in Ian Rankin's 'John Rebus' series, written 27 years ago, features the detective assigned to the case of an Edinburgh child-murderer who leaves suspiciously few clues.

I found the writing style to be slightly pretentious, but I'm left wondering whether my opinion was negatively coloured by the author's introduction, written 20 years later than the book, in which he essentially described his own work as being slightly cringe-worthy.

The plot was remarkably good though, and I'll admit that while the 'truth' had crossed my mind I was distracted by some of the red herrings and was suspecting the wrong person. One criticism would be with the speed of the narrative - which very suddenly increased towards the end and left the conclusion feeling quite rushed.

Overall though I'm not disappointed by Rankin's tale and am glad I began at the start of the series. I look forward to reading more and seeing how the author's style and characters develop.