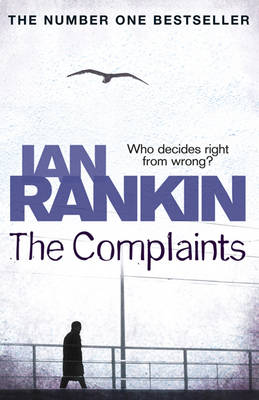 Nobody likes The Complaints - they're the cops who investigate other cops. Complaints and Conduct Department, to give them their full title, but known colloquially as 'the Dark Side', or simply 'The Complaints'. Malcolm Fox works for The Complaints. He's just had a result, and should be feeling good about himself. But he's middle-aged, sour and unwell. He also has a father in a care home and a sister who persists in an abusive relationship. In the midst of an aggressive Edinburgh winter, the reluctant Fox is given a new task. There's a cop called Jamie Breck, and he's dirty. Problem is, no one can prove it. But as Fox takes on the job, he learns that there's more to Breck than anyone thinks.

This stand alone novel is the first of Ian Rankin's that I have read, and I've quite enjoyed it. Detective Inspector Malcolm Fox works for 'The Complaints' - a unit of the Edinburgh police which investigates the conduct of other police officers. He's given the name of a colleague to investigate, but it turns out the colleague is also investigating Fox - on suspicion of murder.

While the concept of the novel is good, the characters are a little stereotyped - a single, ex-alcoholic police officer is a bit of a cliche - and his colleagues also seem to fit into frequently used generic moulds. The writing style is a little awkward, with some rather abrupt chapter endings that seemed to me to break the flow of the novel.

The plot is complex - almost too much so - and for a while baffled me, until it just became frustrating that there was no way I could work out who had done it because vital information was not given to me until after the climax. Personally I prefer a crime book where I can make educated guesses as to what's going on, and with this book that couldn't happen.

Overall, despite enjoying the read, I don't really think the book was that gripping and I didn't really find the characters that likeable. It's certainly not convinced me to pick up more of Rankin's books, but not led me to rule the idea out either.