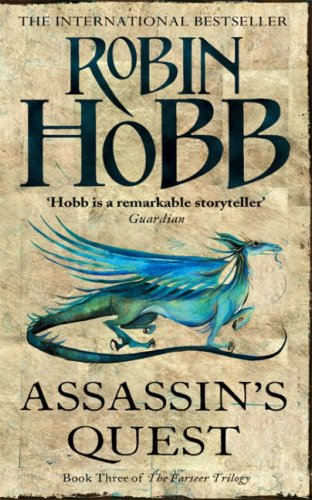 Under the watchful eye of Burrich, old King Shrewd's Stablemaster, Fitz must learn to cast off the wild but carefree ways of the wolf and enter once more the human world: a world beset ever more viciously by the relentless Red Ship Raiders who are now left free to plunder any coastal town they please. But more immediately, a world in which he finds he is utterly alone.

The third book in Robin Hobb's Farseer trilogy is, while still an excellent read, a little bit of a let down after the brilliance of its two predecessors. Fitz must recover from the events at the end of 'Royal Assassin' and set out to kill his evil uncle and restore his good uncle to the throne, while saving the kingdom from its enemies.

The book starts well, continuing the style of the earlier books as Fitz recovers, but then from about a third of the way in it descends into a typical fantasy quest, which seems to drag on forever. The chapters at this point seemed to stretch out longer and longer and I lost part of my motivation to keep reading.

Similarly, the end, once it arrives, seems squashed into such a small page count that by the time it arrived I had given up on this novel actually concluding the storyline. Much is kept from the reader, and indeed the characters, at this point that things become confusing, and at least in one place it seems the author deliberately misleads the audience, which I found slightly annoying.

Overall, this book is much more about the relationships between the characters than before. Not only Fitz's with the others but between them as well, and this is what supports the book through the quest and deliberate withholding of information.

The ending does not live up to some of the hype it is given through the novel though, and so I feel I shall have to read on through the trilogies that serve as sequels to this one, despite a little trepidation.