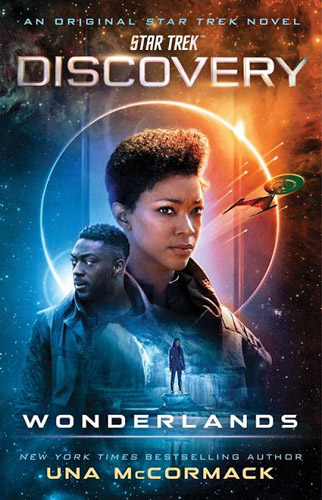 Something has gone terribly wrong, and Burnham has somehow arrived in a place far different from anything she could have imagined - more than nine hundred years out of her time, with Discovery nowhere to be found, and where the mysterious and cataclysmic event known as the Burn has utterly decimated Starfleet. How then can she possibly exist day-to0day in this strange place? What worlds are out there waiting to be discovered? Do any remnants of Starfleet and the Federation possibly endure? With more questions than answers, Burnham must nevertheless forge new friendships and new alliances if she hopes to survive this future long enough for the Discovery crew to find her.

Una McCormack’s second Star Trek Discovery novel, and the eighth overall, aims to fill the gap in Michael Burnham’s story between the first two episodes of season three. I’d say this book is spoilery up to and including episode two though, so probably best to watch the third season before reading.

The book follows Michael as she settles in and begins to explore, with her new friends, while she waits for Discovery to find her. It does a lot of world building, particularly of the life and work of the couriers, and explores a lot of themes that feel reflective of real-world life, including isolation at both the individual and societal level.

I found the narrative to be fairly slow going - the book has surprisingly long chapters, and I think this made me feel like I had to really commit to reading each session, rather than just dipping in and out. I was a good halfway through before it suddenly occurred to me that this was mirroring the structure of a season of Star Trek: Discovery - a relatively small number of episodes, each telling a story, but adding up to one big overall arc.

I did have to take a break in the middle to read something a bit faster paced, just to get myself back into the swing of reading, but then when I returned I felt much more comfortable and able to flow through the final chapters with ease.