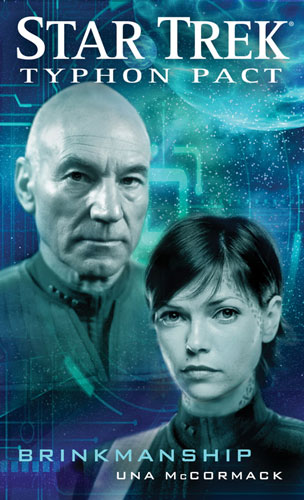 The Venette Convention has always remained independent, but it is about to become the flashpoint for a tense military standoff between the two power blocs now dominating interstellar space-the United Federation of Planets and the recently formed Typhon Pact. The Venetan government turns to the Typhon Pact's Tzenkethi Coalition for protection in the new order, and has agreed to allow three of their supply bases for Tzenkethi use. But these bases-if militarized-would put Tzenkethi weapons unacceptably close to Federation, Cardassian, and Ferengi space.

The eighth story in the Typhon Pact arc, set several years past Star Trek Nemesis, focuses on the Tzenkethi, and their relationships with the Federation and its allies, as well as the Venette Convention, a non-aligned peaceful group whose home lies between the major powers'. The plot follows three strands and focusses on diplomacy and exploring the alien cultures in more detail.

My favourite parts of the novel are those set on Ab-Tzenketh itself as we explore their culture in more depth than ever before and it is revealed to be far more fascinating than I had imagined. McCormack really excels at world building and this makes the novel far more than just another run-of-the-mill adventure.

While it's good too see more of the USS Aventine under Ezri Dax, in places these parts of they story did seem a bit tacked on and I had expected that there might be more of a focus on this crew than the novel actually included. Despite the cover image, the Enterprise portion of the plot is told mainly from the point of view of Doctor Crusher, which is a refreshing change as she has had comparatively little page-time recently. Writing this, I've only just noticed that this makes all the main characters of this novel females, which is also an interesting difference to the norm.

Although I sped through reading it in study two days, this is another excellent Trek novel. I'm really enjoying the way they are going at the moment and hope this can continue. I also look forward to reading more from Una McCormack who has fast become one of my favourite Trek authors.