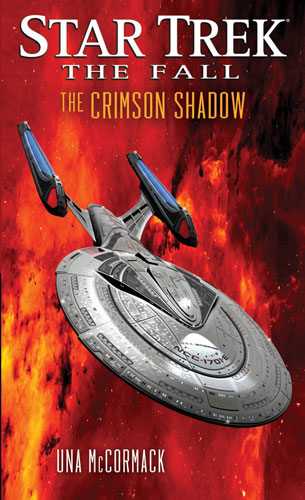 The U.S.S. Enterprise has been sent to Cardassia, where Captain Picard is involved in discussions over the removal of the small number of remaining Starfleet forces. Also present is the Cardassian Ambassador to the Federation, Elim Garak. With goodwill at the highest levels, this meeting should be a formality. However, within a few days of the arrival of the Enterprise, a Bajoran Federation officer is found murdered. The crime may be racially motivated: an ultra-nationalist organization called "Cardassia First" has been stirring up anti-Federation feeling across Cardassia over the past year, and a Bajoran is an obvious target.

The second book in The Fall, the latest 24th Century Star Trek mini-series, runs for the most part concurrently with the first book, 'Revelation and Dust'. It follows Garak, Cardassian ambassador to the Federation, as he heads back to his home planet for the ceremonial signing of a treaty.

This is a very different story from the previous novel, much more about the politics and intrigue on Cardassia, and diplomacy between the various powers, whereas the the first book was much more action oriented. I found it interesting and enjoyable that the style differs so much between the two books, something that I've noticed a lot more recently in Star Trek novels than when I first started reading them in the late 90s - a welcome addition.

McCormack's novel reflects events in the real world masterfully, and has made me think more than anything else I've read for a long time, and yet as well as this she fills the tale with humour and 'easter eggs', many of which I expect I missed.

I found reading this that I wanted to pause between chapters to digest what I'd read, rather than rush ahead, although this plan went out the window as I got to the second half and couldn't stop reading. Her handle on Garak and other Cardassians is as strong as always and I've really enjoyed what she's done with them and their culture in this story.

An excellent novel, and a great continuation of the series - I look forward to the rest keeping this standard up.