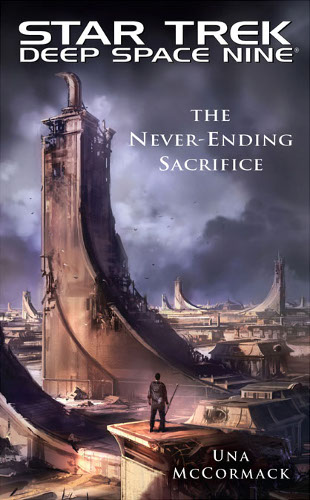 Rugal is a young man with a foot in two worlds - a Cardassian, orphaned as a boy and raised by Bajorans to regard Cardassians as oppressors. Reluctantly repatriated to Cardassia as a teenager, Rugal becomes a first-hand living witness to the downfall of the proud people to whom he was born, first at the hands of the invading Klingons, then during Cardassia's unholy pact with the Dominion - a partnership that culminated in the near-destruction of the Cardassian people. Through it all, Rugal's singular perspective sheds new light on these tragic events, unflinchingly illuminating the arrogance and folly that brought the Cardassians to their ruin, even as he learns that the Cardassian soul is harder to understand than he imagined.

Following on from the second-season Deep Space Nine episode 'Cardassians', Una McCormack's tale follows the life of Rugal, a Cardassian teenager brought up by Bajorans but sent back to live with his biological father. It's a different take on a civilization that was not explored in as much detail as it could have been on television, and gives an interesting alternative perspective on the events of the TV series.

The narrative moves at an excellent pace, easily keeping things in line with the main DS9 storyline throughout, and presents an interesting study of the character and how he grows. McCormack has an excellent grip on her ward and the various other well known characters that appear. Her Cardassia deserves to be the definitive one and she adds layers of texture to the culture that enrich it beyond anything I've read elsewhere.

There are parallels with twenty-first century Earth in the narrative, as well as moments of humour that had me tittering as I read on my commute. It's a perfect example of what Star Trek should be, and I've really enjoyed reading it - why I've waited so long since it was published I don't know.

It's surprising, shocking, tender and revealing. A must read for DS9 fans.