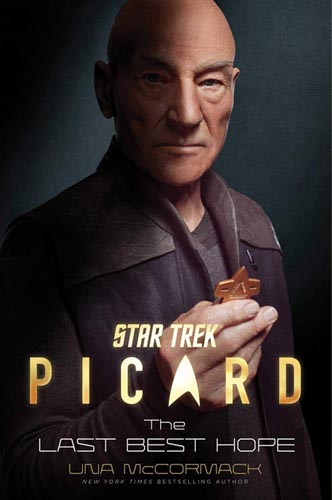 The Last Best Hope is the first tie-in novel for the new Star Trek: Picard TV series, in which we return to the era of the Next Generation to find out what’s been happening some 25 years later. The novel serves as a prequel to the series, and fills in the detail of some of the events 14 years earlier, charting how the effects of events depicted in the 2009 movie affected this, the prime timeline, and led directly to where me meet Picard now.

Although the novel was published after episode 3, I think it’s best read after episode 4 - as it covers a lot of the detail of things that are alluded to in the first four episodes, and could be considered a spoiler if you’ve not seen these already. Arguably, you might want to watch episode 5 first too, but I think it works well after episode 4.

I maintain that Una McCormack is one of the best Star Trek authors out there, and I was incredibly pleased to hear she was writing this. It’s an amazingly well told tale of incredibly difficult times, and she successfully weaves in Star Trek’s classic parallels to today without it seeming in any way forced. The characters leap out of the page in a way that’s almost greater than they do on TV - the background really helps in engaging and empathising with them in the TV series too.

I have to be a little disappointed that the new TV series effectively erases a good chunk of the storyline that I’ve enjoyed reading in the novels over the past decades, and this book sits solidly in the new canon, though there are a few small nods where possible. I’m glad however that the reason the novel continuity has ended is positive - that we have a new TV series which is quite possibly the best written Trek yet.