The Way to the Stars 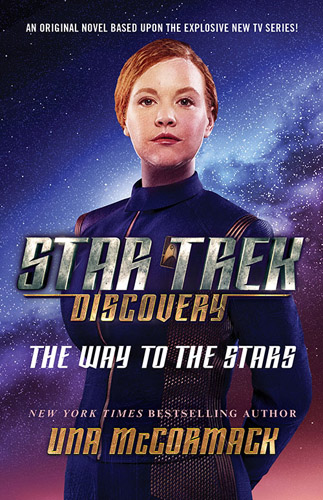 It’s not easy being sixteen, especially when everyone expects great things from Tilly. It’s even harder when her mother and father are Federation luminaries, not to mention pressing her to attend one of the best schools that the Federation has to offer. Tilly wants to achieve great things—even though she hasn’t quite worked out how to do that or what it is she wants to do. But this year, everything will change for Tilly, as she about to embark upon the adventure of a lifetime—an adventure that will take her ever closer to the stars.

The fourth novel based on the latest Star Trek series, Discovery, is the first written by a woman, and I’m slightly surprised that sums wasn’t asked to write one sooner, both because the show has made a point of focusing on its female characters and creators, and because Una is probably the best Star Trek novelist currently writing.

This book tells some backstory for the character Tilly, a cadet when we first meet her on TV, but here a high schooler. It draws on a number of character moments dropped into the series, particularly Tilly’s relationship with her mother, and creates an excellent story intertwining coming-of-age, boarding school, space adventure and much more.

My favourite of the Discovery novels so far - not the same sort of adventure as the earlier three - but much more fitting for Tilly and in keeping with McCormack’s usual trick of telling a character story that’s incredibly engrossing. A must read for anyone who loves Discovery and Tilly, and recommended for everyone else too.