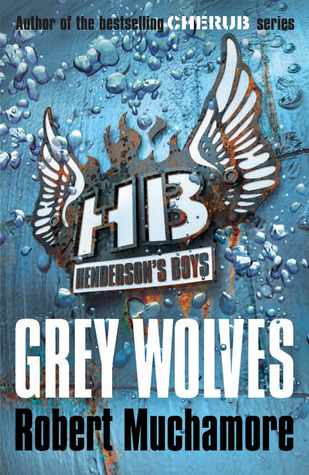 German submarines are prowling the North Atlantic, sinking ships filled with the food, fuel and weapons that Britain needs to survive.

With the Royal Navy losing the war at sea, six young agents must sneak into Nazi-occupied Europe and sabotage a submarine base on France's western coast.

If the submarines aren't stopped, the British people will starve.

Grey Wolves is the fourth novel in the Cherus prequel series ‘Henderson’s Boys’, set in the early days of the youthful secret agent service during World War Two. This time, Henderson has taken a group of his young operatives to occupied France.

As usual, Muchamore’s sense of realism prevails - his are some of the most authentic books aimed at teens that I’ve read, and the historical setting provides an opportunity to describe the realities of day to day living under the Nazis that is brutal and honest.

While the main plot is pretty solid, it lacks some of the finesse of Muchamore’s earlier modern-day works, and seems a little more straightforward. The constant presence of Henderson as a main character doesn’t help, as it makes the story feel less focussed on the children. The secondary plots are far more interesting, dealing with the character interactions and the setting - although some remain fairly adult in focus.

A good book, but not one that particularly stands out within the series.