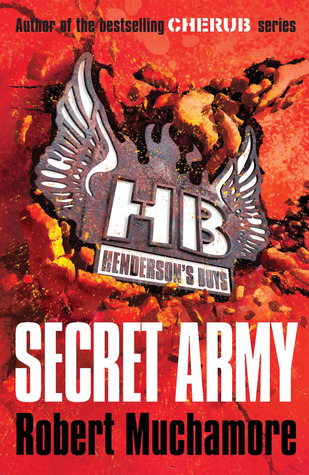 The government is building a secret army of intelligence agents to work undercover, gathering information and planning sabotage operations. Henderson's boys are part of that network: kids cut adrift by the war, training for the fight of their lives. They'll have to parachute into unknown territory, travel cross-country and outsmart a bunch of adults in a daredevil exercise.

The third book in the Henderson’s Boys series (which itself served as a prequel to the author’s modern-day Cherub series), and the one where the story catches up to where I had expected it to start two books earlier. Having successfully escaped France with the aid of a group of children, Charles Henderson has set up a training camp to bring the children up to the level of full spies so that they can join the country’s efforts to win WW2.

The book starts brutally. I was actually shocked by the levels of violence depicted in the opening chapters - and I’ve read all the author’s previous novels so was aware he didn’t shy away from realism. I think this was particularly bad though because of the historical setting and the attitudes of the time, as well as because it was directed at children. I suspect that this may be tough reading for more than just me.

Once that’s over and done with however, the plot becomes much more what I’d expected. A group of plucky youngsters fighting to prove their worthiness against the odds and against the expectations of adults. It’s a fun, tense and exciting adventure with a healthy dose of real emotion and fully believable characters from a range of backgrounds. The 1940s setting is well used, and while using the real attitudes of the time manages to show them in a disparaging light and twist some more ‘enlightened’ viewpoints into the narrative to put it into perspective.

Possibly the best action series for teenage readers I’ve ever come across. I’m totally on course to read all the rest.