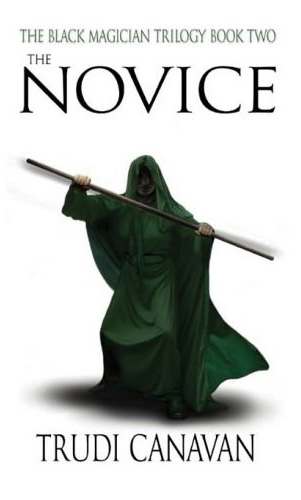 Imardin is a city of dark intrigues and deadly politics, where those who wield magic wield power. Into this established order has blundered a young street-girl with extraordinary magical gifts. Adopted by the Magicians' Guild, her life is changed forever - but for better or for worse?

Sonea knew that she'd face a tough time training within the Magicians' Guild but she little realised the level of animosity she would face from her fellow novices. The sons and daughters of the most powerful families in the realm, her classmates seem determined to see her fail - at whatever cost. But in accepting the protection of the guild's high lord, Sonea may have embraced an even bleaker fate. For High Lord Akkarin harbours a secret that is far darker than his magician's robes.

The second book in the Black Magician trilogy continues the story of Sonea, a girl from the slums who has managed to break centuries of tradition by being accepted into the magical university. It's now effectively her first year of school, and I was worried that it might become derivative of other stories set in education establishments for the magically inclined - but it's not.

The school-based storyline is original and authentic - Sonea's actions and reactions are very believable and the twists throughout make for a fascinating tale. Similarly, the other strands of the plot following some of the more senior magicians are revealing, and in places I'm sure I've already picked up on hints of things to come in book three.

There are places in the narrative where the writing style still feels a little unpolished, as I said about the first book, but this doesn't detract from the tale, and even makes it feel a little more approachable. The plot really sucked me in, and it's one of the most addictive books I've read for a while.