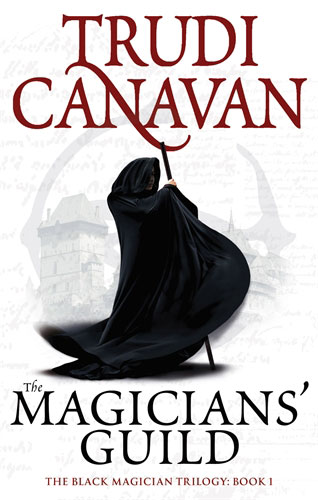 Each year the magicians of Imardin gather together to purge the city streets of vagrants, urchins and miscreants. Masters of the disciplines of magic, they know that no one can oppose them. But their protective shield is not as impenetrable as they believe.

Sonea, angry, frustrated and outraged by the treatment of her family and friends, hurls a stone at the shield, putting all her rage behind it. To the amazement of all who bear witness, the stone passes unhindered through the barrier and renders a magician unconscious.

The guild's worst fear has been realised... There is an untrained magician loose on the streets. She must be found before her uncontrolled powers unleash forces that will destroy both her, and the city that is her home.

Although the commonly accepted wisdom is that you shouldn't judge a book by its cover, the design and imagery certainly play a role in advertising a book, and the works of Trudy Canavan have been screaming at me from the bookshop shelves for a few years. I finally gave in to them and bought this, her first novel and the first part of a trilogy.

The plot is not too complex and it does feel like a first book, as it tells the tale of a girl from the slums who accidentally discovers she has magical abilities, in defiance of the perceived wisdom that only 'the families' can produce magical children, and is then hunted by the local magicians' guild.

There are similarities to Brandon Sanderson's Mistborn trilogy and the all-pervasive Harry Potter series, but actually the book takes its own path well, not following the direct narrative route I was expecting and taking time to explore the world that Canavan has created. The world seems well crafted and there's clearly a lot more there than we get to see in this novel, and I hope that in the sequels we get to see more of it.

Although it didn't quite have that spark that makes a book stand out as extra special, there's nothing really to criticise and I enjoyed it very much and will pick up the rest of the trilogy very soon.