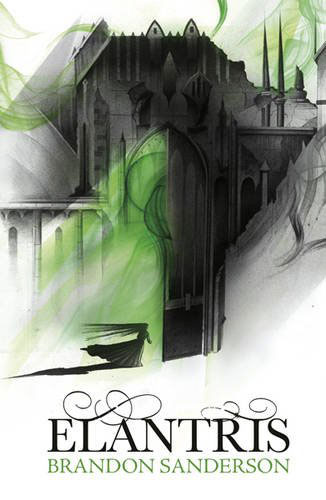 Elantris was built on magic and it thrived. But then the magic began to fade and Elantris began to rot. And now its shattered citizens face domination by a powerful Imperium motivated by dogged religious views. Can a young Princess unite the people of Elantris, rediscover the lost magic and lead a rebellion against the imperial zealots?

Elantis is the first published novel by Brandon Sanderson, who later became famous for being invited to finish the Wheel of Time series, and also for his own later works, including the Mistborn trilogy. I've been reading his works out of publication order, so to me Elantris felt very reminiscent of Mistborn - they share a pattern of female lead character, stratified society, revolution and change.

Sanderson's writing has many strengths, even this early, particularly in world building. Very quickly, he establishes the basis of a fantasy world for his characters to inhabit, and then gradually reveals more and more about it, and in particular its unique magic systems, while leaving plenty of hints that there could be far more to uncover if there were ever a sequel.

The narrative moves at a good pace, keeping things changing throughout, although towards the end the pace is upped quite a bit, and the conclusion almost feels rushed, with a lot happening in the space of a few chapters. The ending also seemed quite abrupt - there's clearly a lot of space to explore further in this world, and it felt like at least a little of that could be done within the novel.

I very much enjoyed returning to something early from Sanderson's canon, and its made me realise again how much I enjoy his writing, and encouraged me to continue catching up with his novels that I've missed so far.