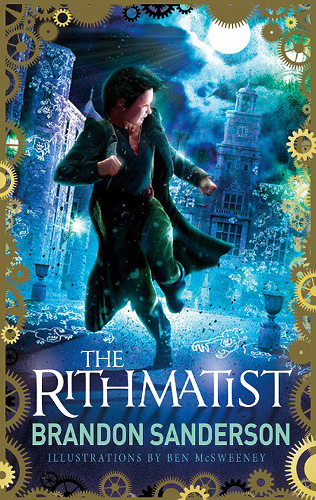 Joel is fascinated by the magical art of Rithmatics, but unfortunately only a chosen few have the necessary gift and Joel is not one of them. Undaunted, Joel persuades Professor Fitch to teach him Rithmatic theory - and soon finds that his knowledge is put to the test when someone starts murdering the top Rithmatic students at his school.

But can Joel work out the identity of the killer and stop them before they realize just what a threat Joel actually is?

Brandon Sanderson has done it again. In The Rithmatist he creates yet another rich and detailed fantasy world, in which a segment of society has the power to do battle by drawing chalk patterns around them. Joel is not one of them, but wishes he was. Instead he finds himself drawn into an investigation after a Rithmatist disappears.

The author's skills in world building really shine in this novel - simple enough for any reader to understand everything they need to, but complex enough to be believable and to tease the reader with more detail in every chapter.

The characters are strong and varied, as usual in Sanderson's stories, although one feels very similar to a character from his earlier Alcatraz series. If one were so inclined there could be parallels drawn with the Harry Potter books (although that could be said of any fantasy book set in a school), though the slight similarities fade throughout.

Sanderson's skills continue to enthral me, and this is a book that could appeal to a reader of any age. The illustrations offset the story nicely, and help explain some of the concepts more easily than the words. Absolutely great.