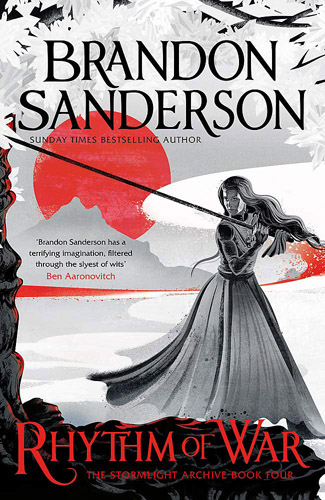 After forming a coalition of human resistance against the enemy invasion, Dalinar Kholin and his Knights Radiant have spent a year fighting a protracted, brutal war. Neither side has gained an advantage, and the threat of a betrayal by Dalinar's crafty ally Taravangian looms over every strategic move.

I don’t remember how many weeks, months probably, it has taken me to make my way through Rhythm of War, the fourth book in Brandon Sanderson’s epic fantasy series The Starlight Archive. As with the previous book, Oathbringer, I took advantage of the five-part structure to take breaks and read other, shorter, novels to help ensure my motivation didn’t falter.

It is of course, another fantastic story - following characters we’ve loved for several books already and new ones, some characters whose positions have changed, and about whom our feelings have changed, as they make their way through life against adversity on a number of fronts. Sanderson weaves the plot lines together deftly, mixing in this time a number of flashbacks to give more backstory for some of the characters that we’ve picked up along the way.

What really stood out about this novel was the prevalence of the themes of mental health - which we got to see affecting quite the number of characters in different ways. I don’t know whether this is more prominent, deliberately or otherwise, or whether my awareness of such topics has increased to allow me to notice it more, but I certainly appreciated seeing these aspects of the characters shown with honesty and realism.

The fifth and final part of the book felt like it massively upped the pace and drama, and had me utterly hooked throughout, leading me to stay up until 1am so as not to have to stop reading as everything became very exciting. I’m solidly looking forward to book five, and seeing where Sanderson takes us to for the mid-point of The Starlight Archive.