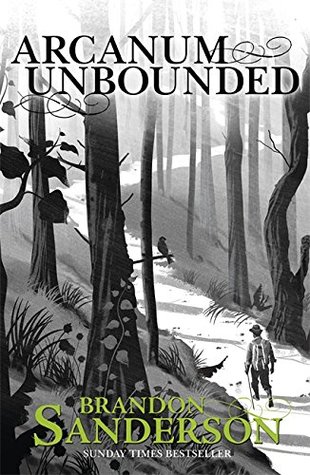 This is the second time I’ve read the Emperor’s Soul - my memory of what happened was barely existent from when I first read it nearly six years ago. It’s a really strong opener to this volume, standing alone despite being set in the world of “Elantris” and requiring no prior knowledge of Sanderson’s works. It does the standard Brandon thing of introducing a world and a magic system through a compelling character in an unusual situation, and does it masterfully.

The Hope of Elantris is like a deleted scene from the original novel, and fairly near the end I think, so contains a number of spoilers. It’s been six years since I read the novel, so took me a few pages to get my bearings again and remember the key aspects of the plot. But that done, it’s a great little short story about one character’s moments in this world.

The Eleventh Metal is a little bit of Mistborn backstory. It’s a nice little introduction to the Mistborn world, but didn’t feel like it added a lot to the overall mythos or character. It’s been quite a while since I read the original Mistborn trilogy though, so my memories of Kelsier’s story are patchy.

The third Mistborn short is a fiction within a fiction. It’s the sensational newspaper account of Allomancer Jak - and Indiana Jones style character. It’s very reminiscent of the author’s Alcatraz novels in tone, and feels a bit like it’s trying to be Pratchett-esque (Sanderson has stated that Terry Pratchett is his own favourite author) - but I’ve never quite got this form of Sanderson, feeling like it’s missing a layer of satire or sarcasm and being a bit too in-your-face with silliness.

Mistborn: Secret History - another story I’ve read before, but barely remember, tells a second story of things that were happening alongside the original trilogy. As such it’s massively spoilerific. It’s a long time since I’ve read the trilogy, so I read synopses if each novel from the internet before entering each part, and that felt like it stood me in good stead to understand. I kind of feel like someday I need to read the two intertwined though, to get a real understanding.

White Sand is presented interestingly as both the opening chapters of the graphic novel (which I have read about half of previously), and as the opening chapters of the unpublished prose version upon which it was based. As before, I found the graphic version hard to consume. I don’t think my brain works in the right way to read graphic novels - I just focus on the words, so miss the artwork and the visual elements of the storytelling. However I found the prose version of the story much more engaging and compelling, and found myself wishing this was the version I had available to read in full.

Shadows for Silence in the Forests of Hell is a shorter story I’ve read before in the Dangerous Women anthology, but which my memory of was patchy. It’s a dark short set in a world that Sanderson will hopefully return to one day, as there’s clearly a lot of potential. It’s a tad reminiscent of Peter V Brett’s Daemon Cycle in terms of the world building, and there’s a slight sense that Star Trek’s Borg might have been a part of the inspiration.

Sixth of the Dust is a new story to me. It’s another great new world to explore, with a fascinating idea for a magic system, and a nice few moral messages to go alongside. One I greatly enjoyed reading.

The final 40,000 words of this collection make up Edgdancer, a Stormlight Archive novella, which I really enjoyed. It’s written in the slightly more casual form reminiscent of Sanderson’s Alcatraz, which is a nice fit for the character of Lift, despite taking me a while to get used to. It almost feels like it’s tying to be Pratchett-esque, but without the satirical element I’m not sure this works. The plot here feels surprisingly important, and I’d be a little concerned that casual Stormlight readers would miss it and just read the main series - although having said that I’m not sure there is such as thing as a ‘casual’ reader of Brandon Sanderson’s works.

Overall, this is a great collection, and I’ve really enjoyed both revisiting the works I’ve read before, and taking in the new ones for the first time.