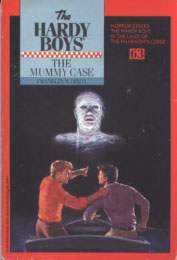 When five Egyptian statuettes are stolen from a museum, the Hardy Boys travel to exotic Egypt.

In their most international case yet, the Hardy brothers are hired by a New York museum to investigate some thefts and accompany a mummy across the Atlantic back to Egypt.

It’s an unusual Hardy Boys story not only because of the setup, but also in its structure and the number of different threads. It almost feels like the authors/publishers had two plot ideas, but neither had enough material, so they whacked them together into one book.

The usual dated elements persist, there’s content that would certainly be badged racist today, and the attitude toward’s Chet’s body continues to be a bit overplayed.

My copy has a number of illustrations which look like they’ve been through a photocopier multiple times before getting to me, as it’s a struggle to tell what’s happening in them. Not that I’ve ever really though that the occasional illustration has ever added anything to this series.