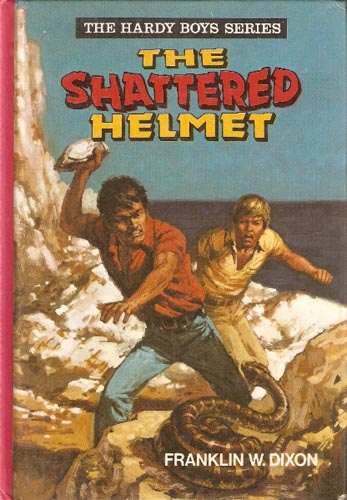 Danger is the name of the game when the Hardys agree to help their pen pal from Greece, Evan Pandropolos, search for a priceless, ancient Greek helmet. Years ago, Evan's uncle had loaned it to Hollywood movie company for use in a silent motion picture, but the treasured helmet had been lost. Picking up foes along the way, the young detectives unearth clues that keep them constantly on the move--from their Greek college campus to California and finally to Greece.

Book fifty-two is somewhere between the earlier “Hardy Holiday” novels and the more recent more international novels. This time the brothers (and Chet) are off to a film school for the summer, but of course become embroiled in a weird race to find an ancient helmet.

Lots of travel has become a cornerstone of the series in the 1970s, and here again there is a lot of movement which feels very glamorous and makes one wonder how the Hardy family are funded - given five family members and at least two full-time employees seem to be living off Fenton’s private detective income.

I enjoyed the different set-up with the film school though - moving the characters into a totally new environment led to some interesting interactions, although I did feel that Chet was underused and seems to have been relegated back to comic relief rather than assistant investigator.

Generally a good adventure, although possibly by the end doesn’t add up into the most solid plot.