The Path of Daggers 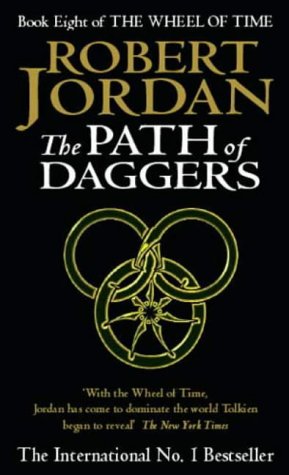 The Seanchan invasion force is in possession of Ebou Dar. Nynaeve, Elayne and Aviendha head for Caemlyn and Elayne's rightful throne, but on the way they discover an enemy much worse than the Seanchan. In Illian, Rand vows to throw the Seanchan back as he did once before, although signs of madness are appearing among the Asha'man.

A seventy day gap between the previous novel and this one seems to have been a little too long as I have lost track of who several characters are and what others are up to. In a way I pity those readers who have been reading these books as they were published - they do suffer from a lack of catch up at the beginning, instead assuming that you have put one book down the same moment that you pick up the next.

This book starts well, then ducks down a little toward the end, before jumping back up again at it's conclusion. For the most part the storyline comes in chunks, with a section the length of any normal paperback focussing on just one character's story before moving on to the next, which makes the book feel more structured than one that flits around. Toward the end though it switches back to flitting for a while as the various threads are tied up, which while necessary feels a little awkward.

The main focus of this novel is back to Rand I felt, but with equal parts dedicated to Elayne and Egwene in the first half and to a lesser extent Perrin. Several coincidences occur that are just about believable as the characters pretty much continue with what they were doing before, with the added bonus of a Seanchan attack. I still think of Rand as the main character despite the rather large ensemble cast and so was glad to be back in his head for significant portions of this book.

I am disappointed with the characterization of Nynaeve in this one though - despite only a day having passed from the previous novel she has undergone something of a paradigm shift overnight and barely says a word. Mat is also completely absent again which is irritating as we're left completely in suspense. There were only a few passages that irritated me. One big reveal was made far to easily, then another. The aforementioned coincidence was deal with well, but there was an occurrence near the end where the reader was left to infer what had happened in the narrative, but the glossary at the end gave it away completely. I recommend not reading the glossaries - they contain spoilers but none of the information you need about what has happened in the earlier books.