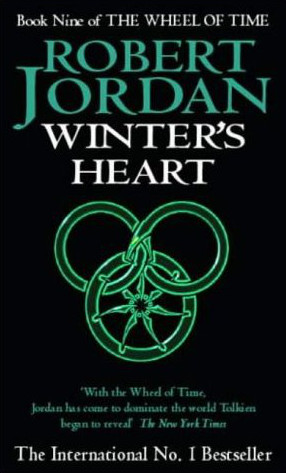 Rand is on the run with Min, but his destination is a mystery. Perrin is hunting desperately for Faile, now a prisoner of Sevanna's sept. In Ebou Dar, the Seanchan princess known as Daughter of the Nine Moons arrives - and Mat, who has been recuperating in the Tarasin Palace, is introduced to her. Will the marriage that has been foretold come about?

By book nine, the rumour mill had seriously hinted to me, the Wheel of Time becomes slow, stale and boring as it plods tediously on getting nowhere nearer its conclusion. I disagree. I thought this book was a refreshing upping of pace on the last few books. Each of the characters has a defined goal again and works to achieve it, and each of them has a storyline (except Egwene) which actually interested me.

Everything I remember hanging over from the previous novel is picked up in this one, and several of the loose ends from earlier in the series are picked up and are starting to be tied off ready to build up to the end of the story. The characters finally start to talk to one another again which is a genius move on their part as their lack of communication and co-operation has really been getting on my nerves.

The only confusing element in this novel was the bad-guys. They seem to chop and change names and bodies so often that it's hard to keep track - this is true of a lot of the minor characters, and there are a lot of them. It makes some aspects quite hard to follow when you don't know who is who and where you've met them before. In this way the glossaries at the end of each novel could certainly be improved - in my opinion they should have existed to remind the reader of who people are and what events earlier in the story were.

Overall though I did think this novel was an improvement in terms of story and structure. It's left sufficient hanging over ready for book ten without leaving you feeling like it has held back. The ending is rather sudden, but not yet knowing where the story is going I can't tell if that's for a good reason. I am actually looking forward to picking up the next book as soon as possible.