A Crown of Swords 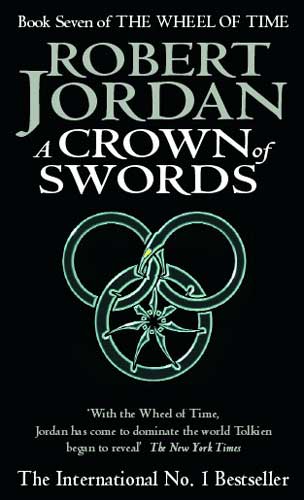 The war for humanity's survival has begun. Rand al' Thor, the Dragon Reborn, has escaped the snares of the White Tower and the first of the rebel Aes Sedai have sworn to follow him. Attacked by the servants of the Dark, threatened by the invading Seanchan, Rand rallies his forces and brings battle to bear upon Illian, stronghold of Sammael the Forsaken

Book seven in this saga is an interesting one. I thought six had gone downhill and that the story was beginning to drag it's feet, and so waited a few months before continuing with the series. The first half of Crown of Swords followed on immediately from book six in terms of both plot and style.

Jordan seems to have made a bad plan for the storyline at this part of his tale, as it appears to call for Rand, his main character, to sit around doing nothing, and some plot elements seem forced just to give an opportunity for Rand to make an appearance.

I did enjoy some of the appearances by other characters in this one though. I liked that Mat had a lot if the attention, and a nice chunky storyline like Perrin had back in book four, although Perrin almost disappears again like he did back in book five.

The second half of this volume is where things start to pick up again, with the action focussing on Mat, Elayne & Nynave as they search an unusual city for a lost artefact. It's really nice to see the characters moved a little out of their comfort zones and their expectations challenged. The presence of some action actually happening for once rather than lots of talk and a tiny battle scene is excellent.

Overall, I am still glad I had a little break before returning to the Wheel of Time, but once the dull first half was fought through this book turned out to be a good read. The fantasy world is beginning to get a little too detailed to remember everything now though so I'm glad that the next book in the set is a 'reference guide'.