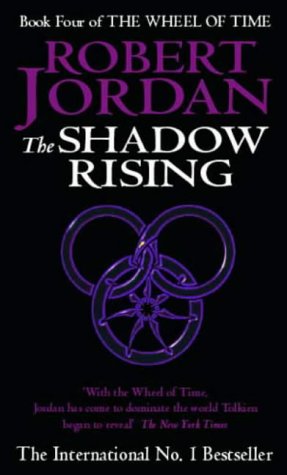 The Stone of Tear, invulnerable fortress of legend, has fallen. The Children of the Dragon have risen to the call of prophecy and march to the aid of the Light. Callandor, the Sword That Is Not a Sword, is held by Rand al' Thor, the man proclaimed as the Dragon Reborn. But still the shadows lengthen and still the Forsaken grow in strength.

This fourth book in the series is the best so far. It's a mix of romance and war as the characters grow closer and begin to pair off in a slow start to the book - the first half seems to pass very slowly before suddenly speeding up as the second half kicks in.

Once the group has split into three directions, it's a refreshing change that they don't spend the rest of the novel being drawn back together, as the girls chase the Black Ajar, Perrin returns to the Two Rivers to defend his homeland, and Rand leads everyone else off to only he knows where.

It makes for a good mix, almost presented as three separate novels as it focusses on each group for a long period in turn, not returning to the pattern of mixing quickly between scenes until the climax nears - and what a climax there is. For once I didn't feel let down by the ending, there's plenty going on for all three groups and lots of satisfactory battles that mean the conclusion isn't rushed.