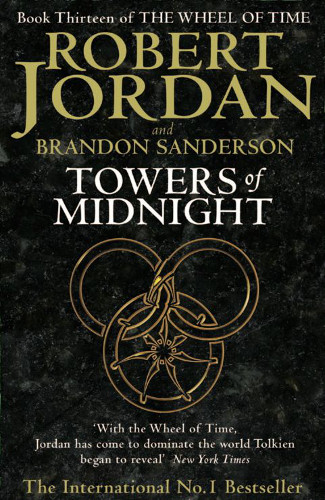 The Last Battle has started. The seals on the Dark One's prison are crumbling. The Pattern itself is unravelling, and the armies of the Shadow have begun to boil out of the Blight. Perrin Aybara is haunted by spectres from his past. To prevail, he must find a way to master the wolf within him or lose himself to it for ever. Meanwhile, Matrim Cauthon prepares for the most difficult challenge of his life. The Tower of Ghenjei awaits, and its secrets will reveal the fate of a friend long lost. The end draws near. It's time to roll the dice.

It's hard to digest Brandon Sanderson's second entry in the Wheel of Time series after just one fairly quick reading, but my initial impression is that he continues the story well, while restoring the passion that some of Robert Jordan's later novels lost.

Much of the focus of this book is on Perrin, and it serves as a vehicle for him to find his place in the world, much as the previous book did for Mat and Rand. Some characters are left with little coverage, however they are generally those who featured more in the previous episode and so the idea that these are just two parts of one overarching final novel comes across. Here, the final pieces are moved into place ready for next year's grand finale.

Sanderson's grasp of the characters is stunningly good, and the way he successfully emulates Jordan's style makes the book believable as a continuation. There are a few places where the language has become, what seems to me, more Americanised than that which Jordan used, which feels out of place breaking the flow of the narrative.

There is much more action in this than possibly any of the earlier novels, and despite its length this makes the story feel faster, and it seems like it has covered a lot more ground than on reflection it has. I was confused in some places as the way that Sanderson has split the plot leads to scenes being narrated out of chronological order, with much of some characters' storylines occurring simultaneously with other characters' events from the previous novel. This is of course nothing new for the series, and it makes sense that the stories were split this way, but means that at one time the same character was in two places at once. There are subtle attempts to make this clear in the narration but it is rarely made explicit and easy to forget.

The biggest frustration is that the books ends, which leaves me to wait for an entire year before I am able to read the conclusion. Sanderson has an irritatingly genius way of leaving the reader wanting more, and as I am a late comer to the Wheel of Time this will be my longest wait between instalments.