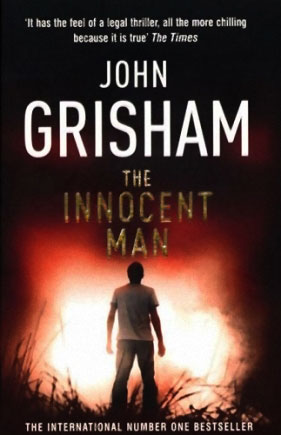 When Ron Williamson signed with the Oakland A baseball team, he said goodbye to his hometown of Ada and left to pursue his dreams of big league glory. Six years later he was back, his dreams broken by a bad arm and bad habits. He began to show signs of mental illness. In 1982, a cocktail waitress was raped and murdered, and for five years the police could not solve the crime. For reasons that were never clear, they suspected Ron and his friend Dennis. The two were finally arrested in 1987 and charged with capital murder. With no physical evidence, the prosecution's case was built on junk science and the testimony of jaihouse snitches and convicts. Ron Williamson was sent to Death Row.

John Grisham's first foray into non-fiction has me torn. It is clearly a good book, a lot of work has gone into it, and it makes a very important point about the quality of a judicial system that can allow such miscarriages of justice to occur. However I'm not convinced that it made for a good read.

The book tells the tale of Ron Williamson - every word of which is true - who was arrested after two local police officers decided that he must have committed the murder despite the lack of evidence and without bothering to follow up any real leads.

It is a shocking tale, and does nothing to bolster my current lack of trust in any foreign legal system, particularly one with such an obvious lack of checks and balances. The treatment that Ron gets is awful and it is absolutely right that Grisham has chosen to use his popularity as a fiction author to highlight the problems.

However, it's not always an engaging read. The first two thirds move quite slowly, with a lot of repetition, which partly comes across like a lawyer trying to reiterate a point to a jury. Perhaps that's the point, but to my usual style of fast reading it felt a bit like lazy editing. The style is quite dry and clinical, and I found it hard to gain an emotional connection with the people portrayed.

The nature of the events makes the book hard to read as well. It's not an easy tale to take in, and knowing where it was going made it more difficult. At times I wanted to take out my anger at some of the people portrayed on the book itself. It was hard to motivate myself to keep reading because of this.

However I'm glad I've read it - it even makes some of Grisham's fictional works seem far more believable. Perhaps it is one that everyone should read - after all, anyone could be picked to serve on a jury, and need their eyes opened to the possibility of such travesties.