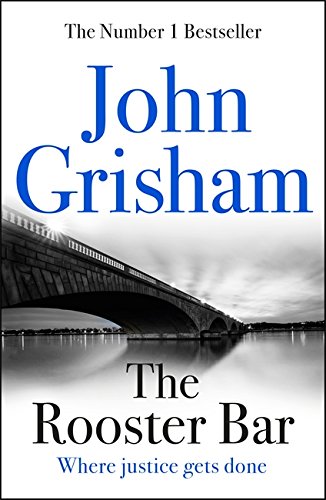 Law students Mark, Todd and Zola wanted to change the world - to make it a better place. But these days these three disillusioned friends spend a lot of time hanging out in The Rooster Bar, the place where Todd serves drinks. As third-year students, they realise they have been duped. They all borrowed heavily to attend a law school so mediocre that its graduates rarely pass the bar exam, let alone get good jobs. And when they learn that their school is one of a chain owned by a shady New York hedge-fund operator who also happens to own a bank specialising in student loans, the three realise they have been caught up in The Great Law School Scam.

Somehow, John Grisham has come up with a new twist on the Legal Thriller - following a friend's suicide, three law students decide to give up college and just practice without licences. And then their adventures really begins.

It's interesting to have a novel from Grisham where his main characters suffer a major trauma at the start, but it still feels like he hasn’t quite got a grip on communicating emotion, as they still come across quite robotic even while suffering grief.

I'm actually getting a little irritated by the cleanness of Grisham's writing style, it's very perfunctory and action based rather than worrying too much about emotion or character. It's almost dry enough to be a formal report of events that occurred.

Ultimately this book was a bit disappointing. The ideas were novel and intriguing, but the execution almost felt like some sort of weird morality tale rather than entertainment.