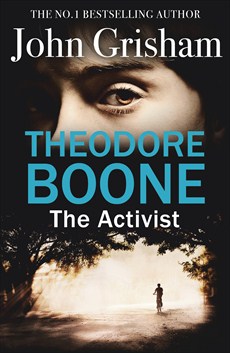 Kid lawyer Theodore Boone's friend Hardie Quinn is about to have his family home bulldozed to make way for a bypass. Hardie is not the only one affected: other homes, businesses and schools lie in the path of the road. Theo has to tell his friend the bad news: for once, the law isn't on his side, and there's very little anyone can do to end the destruction.

Theo joins the campaign to stop the road. But when he stumbles on a terrible secret about the corrupt men behind the plan - a secret it is illegal for him to know - Theo must figure out how to keep the developers from breaking the law, without breaking it himself.

I've finally got around to reading the fourth Theodore Boone story, and many of my criticisms of the earlier books still stand, though Grisham has clearly made some effort to address them. This time Boone gets tied up in a political disagreement between those for and opposing a new bypass. This alone sounds enough to put off most teenagers, and so the back cover blurb ignores it almost entirely and picks up on one tiny plot point.

Theodore Boone is a 1950s child, living with 1950s parents in a 1950s town in 2010s America - he has access to modern technology, but his character, and those of everyone around him, are stuck in some sort of time warp. However Theo is at least no longer the goody-two-shoes perfect child that he was in the first three books - now he doesn't brush his teeth!

The plot is slow to get going and takes several substantial detours from what seems to be the main plot, before heading back to it and rushing through the climax. This is similar in a way to Grisham's novels for adults, where I often feel the last few chapters weaken the whole.

It's clear throughout that the author is trying to present the political aspects of the narrative in an unbiased way where characters of both opinions are shown, but this pretty quickly descends into something of an us vs them situation where one side is shown to be morally superior than the other. There are also, bizarrely, a couple of places where. Grisham's usual dispassionate narration trips over and ends up giving a biased opinion that even the characters depicted in that scene don't subscribe to.

Overall, the characters and world are better in this book - a step more believable and up to date, but the plot is weak. It may hold the attention of a studious young reader (maybe aged 11 or 12) but it does nothing to appeal to the masses.