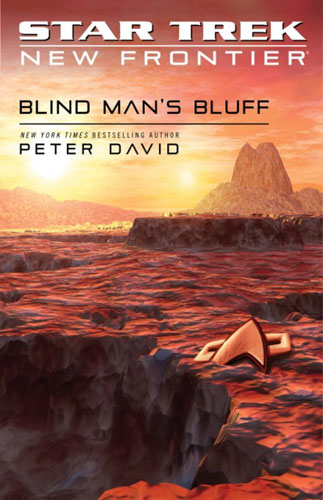 Captain MacKenzie Calhoun has faced incredible odds before, but nothing he has ever experienced could prepare him for the simultaneous threats from two of the most destructive forces he's ever encountered. The first is the D'myurj - a mysterious and powerful alien race bent on either the complete domination of humanity or its destruction. The second is Morgan Primus, once a living creature, now an incredibly sophisticated computer simulation taking up residence within the very core of the USS Excalibur.

The latest entry in the New Frontier series is another disappointment. It makes for a very quick read that hardly justifies the trade paperback format and accompanying inflated price tag. My experience with it wasn't helped by the complete lack of memorability of 'Treason', the previous book in the series.

In 'Blind Man's Bluff', the aliens from 'Treason' are out for revenge, attacking Captain Calhoun on his home planet of Xenex, while he is also under assault from forces closer to home, including Morgan, the self-aware computer aboard the starship Excalibur.

As much as I used to love New Frontier, I've either grown out of it or it has lost its way. The plot is extravagant and unbelievable, and totally disconnected from the continuing storylines that other Star Trek authors are writing. The characters, once a rich, varied group, have been replaced with bland two-dimensional cardboard cut-outs, none of whom seem to have any existence except to be the butt of jokes from the superhero Calhoun has become.

Despite all this the book does have a few good points. There are some amusing moments (Doctor Who references) and for the most part the narrative is well written, it's really just the plot that lets it down. I imagine that for old time's sake I'll continue to read New Frontier when it comes along again, but I'm not going to find myself annoyed by the inevitable protracted delays to the publication date.