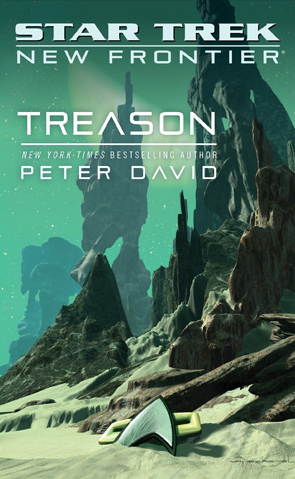 Tensions within the New Thallonian Protectorate are at fever pitch following the murder of Prime Minister Si Cwan. Captain Mackenzie Calhoun and the crew of the USS Excalibur face an uncertain future in the turbulent Andromeda Galaxy. The sudden power vacuum will have far-reaching consequences for them all, as lives and the very fate of Sector 221-G are catapulted into utter chaos.

Though a quick read, the latest novel in the New Frontier series has brought it back from the brink. A definite improvement on recent falls.

Several factions are out to kidnap the son of Robin Lefler and the late Si Cwan, some with more obvious intentions than others. They will stoop as low as controlling the minds of crew members to achieve their goals, but the ghost of Si Cwan has similar powers.

My main complaint about recent New Frontier novels is that the crew have become too spread out, and that there are too many main characters to focus on, however this time, David has pulled the focus back to the Excalibur, and while the other characters still appear, it's only in a supporting role.

There's an interesting juxtaposition, whereby the new aliens wanting to take control of bodies is bad, while Si Cwan's ghost taking control of Kalinda's body is somehow right, though none of the cast seem to realise this. The beginning also feels disconnected from the rest of the plot, as the original gang of kidnappers, while still suspected for a short while, are soon forgotten about.

Overall, I'd say it's an improvement, and has left the story with a few loose ends left to tie up. It still needs to lift a little further to equal the earlier days though.