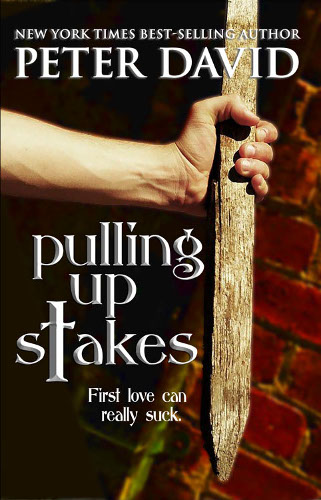 Vince is a young vampire hunter who lives with his vampire hunter mother in an entire community of vampire hunters, who in turn are part of a cult of vampire hunters going back all the way to the French Revolution, which many believe to be an uprising of the poor against the rich but was actually a massive purging of vampires from the French nobility (hence the guillotine; way more efficient than shoving stakes into their hearts.)

And here's Vince's major problem: he's a vampire. But he dare not "come out of the coffin," as it were, and reveal his true nature, because his mother will literally kill him. And if she doesn't manage it, she has lots of friends and neighbours to help make sure that happens.

The first half of Peter David's Pulling Up Stakes introduces us to Vince, a vampire hunter with a deadly secret - he is a vampire himself.

David builds a surprisingly rich world in a short space of time, giving his characters round edges and creating a tale that is easily believable. It's an interesting concept to set up what appears to be a straightforward story, but becomes increasingly complicated throughout.

The author's usual sense of humour shines through, filling the first-person narrative with real-world references that amuse at the expense of other popular vampire franchises.

It was great to have something short yet memorable to read through over a weekend and I've already downloaded part two to continue reading when I next have an odd e-book moment.