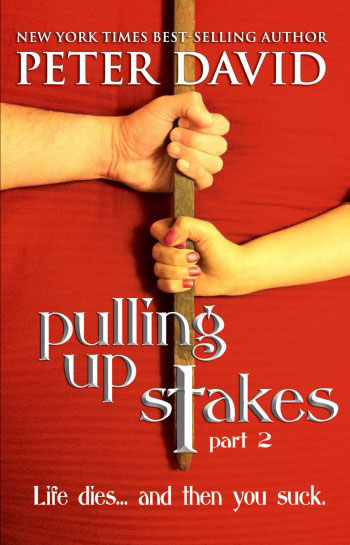 Vince's investigation into the murder of Tracy and the assault on Amber leads him down paths that he could not possibly have expected, including not only a confrontation with the woman who turned him into a vampire, but also a secret that could upend the entirety of the Order of the Chevaliers.

The second half of Pulling Up Stakes continues the story from part one, in which Vince, the vampire hunter who is himself a vampire, is drawn into an unexpectedly complicated situation that he's desperate to get out of.

It's taken me some time to read this ebook, reading it in chunks over the past nine months when the opportunity has arisen and I've not had any dead-tree books to occupy myself with. I was surprised to find though that this didn't impede my enjoyment of the story, and my memories of the story so far hadn't faded as much as I thought they might.

The novel is an interesting take on the vampire meme and Peter David certainly shows that he's able to think outside the box with his storylines. From what sounds like a simple premise he's created a rich world inhabited by deep and varied characters with a complex set of storylines.

Probably the best vampire story I've read, and definitely a world with plenty of possibilities for more stories to come.