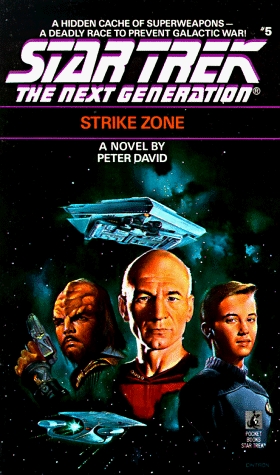 Deep in the uncharted regions of our galaxy, a primitive, warlike race - the Kreel - have stumbled upon weapons powerful beyond their wildest imaginings. The Kreel have used those weapons to attack their most bitter enemies - the Klingons. Now Captain Jean-Luc Picard and the crew of the Enterprise have been called in to mediate the dispute. The Enterprise will ferry diplomatic teams from the two warring races to the source of their conflict - the mysterious planet where the weapons were discovered - in an attempt to find a peaceful solution to the conflict, and discover the origins of the super-powerful weapons. Before the entire galaxy erupts into full-scale war.

Book five of the Next Generation tie-in novels sees us joining the Enterprise D crew early in the second season, dropping references all the way through to some of the new aspects of the show that have been introduced - Riker's beard, Crusher's absence, Pulaski's presence, and the arrival of Guinan and Ten Forward.

It's also the first Star Trek novel by now-veteran author Peter David, one of the most famous authors in all of geek literature, and I'm amazed at how much he was allowed to get away with even back in the eighties. This is probably the most hilarious piece of Trek fiction I've read in all seventeen years I've been reading it. Right from the start David is joking around with the characters, especially Riker, and this makes it into a very entertaining novel that survives the decades between publication and reading extremely well.

What sadly hasn't survived intact is some of the background that David supplies for his characters. There's a lot of backstory and exposition that is later massively contradicted by later episodes (especially relating to the Klingons) or that the TV writers had probably planned but never followed up on (Picard/Pulaski). Despite this being me out of the plot a little, it's good fun and interesting in itself to see what was going through the minds of the writers back this early in the series.

Finally, the plot of this specific novel is also good - both the A and B stories are interesting and serve to explore the world well and bring up a number of points that deserve reflection and thought. I was intrigued to see the introduction of one character from a species over read about before I later Trek books by other authors, and I didn't expect to see inter-novel connections like that from so early on. Bit disappointed though that he's consistently referred to as an elf through the story, as that feels a tad racist.

Overall a really good and enjoyable novel and one I'm glad that my re-read brought to my attention. I'm now looking forward to reading more of David's output as I continue the series.