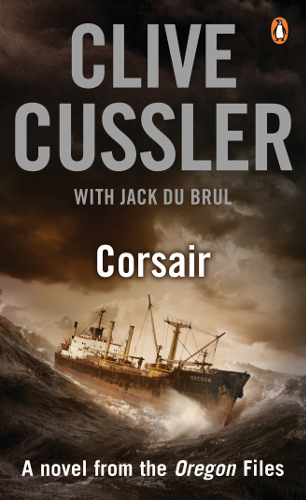 When the US Secretary of State's plane crashes while bringing her to a summit meeting in Libya, the CIA, distrusting the Libyans, hire Cabrillo to search for her, and the misgivings are well founded. The crew locates the plane - but the Secretary of State has vanished. It turns out Libya's new foreign minister has other plans for the conference, ones Cabrillo cannot let happen. But what does it all have to do with a 200-year-old naval battle, and the centuries-old Islamic scrolls that the Libyans seem so determined to find?

Okay, I'm only giving this one two stars just for the final page, which has just really annoyed me. I'm going to go into spoilerific details.

As a sub-plot which seems more suited to be a main plot of a NUMA files novel, the cast go after the 'Jewel of Jerusalem', which turns out to contain a drop of Jesus' blood. At the end of the novel, the doctor analyses the blood, and concludes that it is the correct age (within a 130 year buffer), and further, that it only contains female DNA.

Remarkably however, this doesn't mean that it's the DNA of a female, because the chromosomes say otherwise... interesting. Even I know that chromosomes in general can't be male ones and yet be only female DNA.

This is the worst piece of Christian propaganda I have ever seen. Even worse when it's in a novel meant to be promoting peace between Islam and the West. Well, having said that, the bad guys are always Muslims.

Anyway, rant over - now the rest of the book. It's not as well done as some of the early Oregon Files novels, where they are a crack team who plan well and implement their plans exactingly. Now they just seem to go along with the flow, much like in the main Dirk Pitt series.

Maybe I'll come back when I've got over the end to write something nicer.