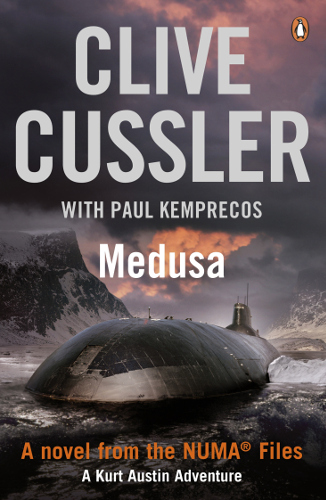 In the Micronesian Islands, a top-secret, US government-sponsored undersea lab conducting vital biomedical research on a rare jellyfish known as the Blue Medusa suddenly disappears. At the same time, off Bermuda, a bathysphere is attacked by an underwater vehicle. Stranded half a mile below the surface, its passengers are left to die. Only Kurt Austin's heroic measures can now save them from a watery grave.

A good read again at last from the Cussler series. Medusa focusses a lot more on Kurt & Joe and less on Paul and Gamay, which is a little dissapointing, but it brings back a feel of the classic duo novels in Cussler's canon.

It's quite a timely plot as the manufactured virus that forms the greatest threat in this novel is remarkably similar in scope to the ideas about swine flu that were circulating in the real world at the time of its release, which adds to the believability of the story. There's also nothing too outlandish like there has been in a few of the more recent Cusslers, and no religious twists at the end like Corsair had.

Overall, I enjoyed reading this one, and am hoping this is the way they continue. The next two are 'The Wrecker', a sequel to 'The Chase', which should be interesting as that seemed more realistic given its historical setting, and 'Spartan Gold', a new series, and I'm looking forward to both.