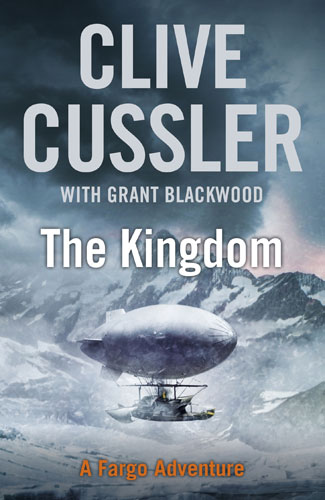 On a journey that will take them to Tibet, Nepal, China, Venice, and Siberia, the Fargos will find themselves embroiled with black market fossils, an ancient Tibetan kingdom, a lost landmass in the North Sea, stone-age ostrich egg shards inscribed in a cryptic language, a pair of battles separated by thousands of miles and hundreds of years, and a skeleton that could just turn the history of human evolution on its head.

The third book of Blackwood and Cussler's 'Fargo Adventures' is the best yet, although that in itself is not much of a compliment. After a friend goes missing in Nepal, the Fargos are hired to find him, but they soon fall into a deadly treasure hunt, as usual.

Overall, this book seems toned down from its predecessors. The characters are less cartoony, the adventures less implausible, and the background less fantastic - all good changes. There are still the odd moments where the characters have silly 'comic' exchanges, and elements of the background that are slightly unbelievable, but mostly the book is based on a good scientific set-up, and Sam, Remi, and their enemies are realistic characters with believable relationships.

The novel is not perfect though. I'm still not entirely convinced by the concept of two rich treasure hunters, but that aside, the plot moves along at a good quick pace taking in plenty of action. It doesn't, however, flow quite right, particularly where it is broken up between chapters, skipping over several days. In places this may make things more believable with a more realistic portrayal of time passing, but in some places we leave the couple in peril only to turn the page and find them back at the hotel, only to be filled in on their escape in the form of a brief flashback.

Overall, certainly an improvement for this series, and I hope a sign of better things to come, but not quite back up to Cussler's old standard yet. I had been thinking this might be the point where I gave up on the Fargos, but this book has convinced me otherwise for now.