A Time to Sow 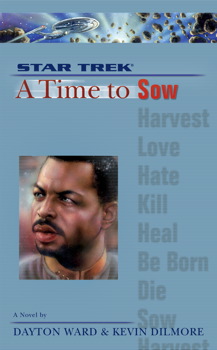 Centuries ago a hardy band of survivors, fleeing a planetary catastrophe, took refuge in the inhospitable asteroid belt. Now they must make a choice: to go on as they are on the crowded but functional asteroids or to give up all they have worked for in a desperate plan to rebuild their dead home planet.

The third 'A Time To...' book, while not a direct sequel in the truest sense to the second, is very definitely a follow on, in which Picard and the Enterprise are suffering from the damage inflicted on their reputation previously.

Unlike normal Trek novels, this series seems to have escape from the pattern where each book has to be focussed on an individual character, and it is more of an ensemble tome. Despite this, it gives an appearance of being biased slightly towards Geordi - but it's difficult to say whether this is real or just an appearance because he normally gets little more than a couple of scenes.

My only issue with this book is that it is a bit slow to get going. It starts well, but while interesting things are happening, the actual plot doesn't make an appearance until fairly near the end of this volume (the first half of a duology). This is followed by irritatingly little being revealed about the bad guy's identity before we reach the cliffhanger ending, or most of the detail of his motivation.

Overall I think this is in the upper half of the trek book ranking - it's certainly not bored me as I read it in an afternoon - though it has yet to make a mark as a really special adventure.