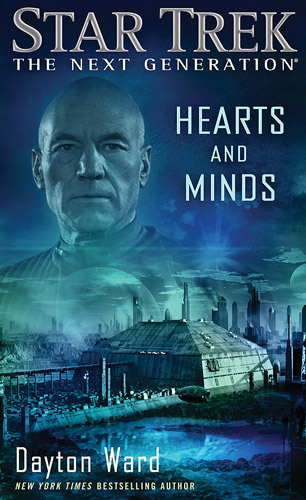 2031: United States Air Force fighter jets shoot down an unidentified spacecraft and take its crew into custody. Soon, it's learned that the ship is one of several dispatched across space by an alien species, the Eizand, to search for a new home before their own world becomes uninhabitable. Fearing extraterrestrial invasion, government and military agencies swing into action, charged with protecting humanity no matter the cost.

2386: Continuing their exploration of the Odyssean Pass, Captain Jean-Luc Picard and the crew of the Starship Enterprise discover what they at first believe is a previously uncharted world, with a civilization still recovering from the effects of global nuclear war. An astonishing priority message from Starfleet Command warns Picard that the mysteries of this world may well weave through centuries of undisclosed human history.

A new entry in the Next Generation continuation series, this follows a long line of novels taking the story of the Enterprise and her crew forward several years from the last time we saw them on screen. Despite that, this does serve as a pretty stand-alone story in the classic style.

The Enterprise is exploring and comes across a planet that nobody’s made contact with before, but then strange orders arrive from Starfleet Command, and Picard is left to investigate without really understanding.

It’s a great mystery thriller, with a new premise that harkens back to some of the classic tropes of the series. It’s also the third entry in the author’s pseudo-trilogy featuring callbacks to the 20th & 21st Centuries - though having not read the first two (they are Original Series novels which I generally don’t read) I can’t comment on how it fits into that.

An enjoyable adventure, and one that mostly stands alone. But if you are reading everything, I’d recommend this is read after David Mack’s ‘Control’, as there are some references.